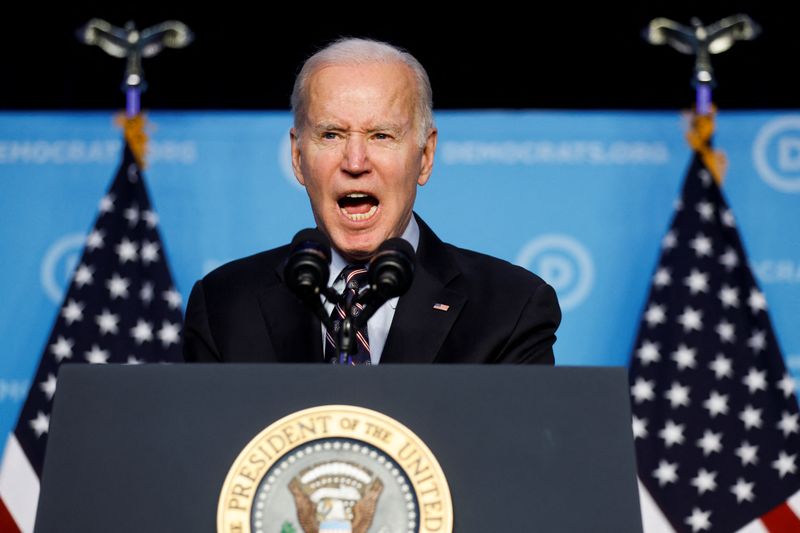 By Pavel Polityuk and Natalia Zinets

LVIV, Ukraine (Reuters) -President Volodymyr Zelenskiy said on Friday Ukraine was at a “strategic turning point” in the war as Russian forces bombarded cities across the country and appeared to be regrouping for a possible assault on Kyiv, with satellite images showing them firing artillery as they closed in on the capital.

The governor of the Kharkiv region, on the Russian border, said a psychiatric hospital had been hit, and the mayor of the city of Kharkiv said about 50 schools there had been destroyed.

In the besieged southern city of Mariupol, the city council said at least 1,582 civilians had been killed as a result of Russian shelling and a 12-day blockade that has left hundreds of thousands trapped with no food, water, heat or power.

Russia’s defence ministry said the Black Sea port was now completely surrounded and Ukrainian officials accused Russia of deliberately preventing civilians getting out and humanitarian convoys getting in.

A new effort to evacuate civilians along a humanitarian corridor from Mariupol appeared to have failed, with Ukrainian Deputy Prime Minister Iryna Vereshchuk saying Russian shelling prevented them from leaving.

European Union leaders meeting in France said they were ready to impose harsher economic sanctions on Russia and might give Ukraine more funds for arms. But they rejected Ukraine’s request to join the bloc.

At a meeting with Belarus President Alexander Lukashenko, Putin said there were “certain positive shifts” in talks with Kyiv, but did not elaborate.

With the Russian assault now in its third week, Zelenskiy, who has rallied his people with a series of addresses, said Ukraine had “already reached a strategic turning point”.

“It is impossible to say how many days we still have (ahead of us) to free Ukrainian land. But we can say we will do it,” he said. “We are already moving towards our goal, our victory.”

Russia’s main attack force has been stalled on roads north of Kyiv, having failed in what Western analysts say was an initial plan for a lightning assault.

But images taken on Friday and released by private U.S. satellite firm Maxar showed Russian forces were continuing to deploy closer to Kyiv and actively firing artillery toward residential areas, according to the company’s analysis.

Multiple homes and buildings were on fire and widespread damage and impact craters were seen throughout the town of Moschun, northwest of Kyiv, Maxar said. Reuters could not independently verify the images.

Britain’s defence ministry said Russia appeared to be gearing up for new offensive activity in the coming days that would probably include operations against Kyiv.

However, the Russian ground forces were still making only limited progress, hampered by logistical problems and Ukrainian resistance, it said in its intelligence update.

The Ukrainian general staff said Russian forces were regrouping after taking heavy losses. Ukrainian troops had pushed some back to “unfavourable positions” near the Belarus border to the rear of the main Russian column, it said.

Ukrainian authorities said a psychiatric hospital near the eastern town of Izyum had been hit. Emergency services said no one was hurt as the patients were already sheltering in the basement.

Kharkiv governor Oleh Synegubov called the attack a war crime. Reuters could not verify the report.

Moscow denies it has been targeting civilians in what it calls a “special operation” to disarm and “de-Nazify” Ukraine. Ukraine and its allies say this was a baseless pretext for Russia’s invasion of the democratic country of 44 million.

Three air strikes near a kindergarten in the central city of Dnipro killed at least one person on Friday, state emergency services said.

The mayor of Lutsk said four people had been killed and six wounded in an attack on an airfield – a rare strike on a target deep in western Ukraine, far from the battlefields in the north, east and south.

Britain’s defense intelligence ministry said Russian air and missile forces had also conducted strikes in the past 24 hours against the western city of Ivano-Frankivsk.

In Kharkiv, hundreds of people were sheltering in metro stations. Nastya, a young girl lying on a makeshift bed on the floor of a train carriage, said she had been there for more than a week, unable to move around much and ill with a virus.

Moscow said its separatist allies in the southeast had captured the town of Volnovakha, north of Mariupol.

But Mathieu Boulegue, an expert at London’s Chatham House think tank, said Moscow might not have sufficient troops to achieve its goals.

“You can’t invade a country on a one-on-one ratio (of troops). Nobody has done it, which means that either something was wrong or they had very wrong assumptions moving into this war,” he told Reuters.

Ukraine also raised the prospect of Moscow’s ally Belarus throwing its troops into the war, accusing Russia of staging “false flag” air attacks on Belarus from Ukraine to provide an excuse for an offensive.

Belarus has served as a staging post for Russian forces both before and after the Feb. 24 invasion. The Kremlin did not respond to a request for comment.

Putin and Lukashenko agreed on Friday that Moscow would supply its smaller neighbour with up-to-date military equipment and on mutual support against Western sanctions, including on energy prices, the official Belarus Belta news agency said.

Away from the battlefields, EU leaders meeting near Paris agreed to spend more on defence and cut reliance on Russian energy supplies by 2027. But, wary of angering Moscow further, they declined Ukraine’s call for a speedy admission to the EU.

Western countries have swiftly moved to isolate Russia from the global financial system.

The Russian rouble ended a third week of hefty losses. The currency has lost a third of its value in Moscow exchanges since Russia invaded Ukraine, as the local economy buckles under the pressure of sanctions imposed across the world.

European Commission President Ursula von der Leyen said that on Saturday the bloc would suspend Moscow’s privileged trade and economic treatment; crack down on its use of crypto-assets; and ban the import of iron and steel goods from Russia as well as the export of luxury goods in the other direction.

“Tomorrow, we will take a fourth package of measures to further isolate Russia and drain the resources it uses to finance this barbaric war,” she said in Brussels.