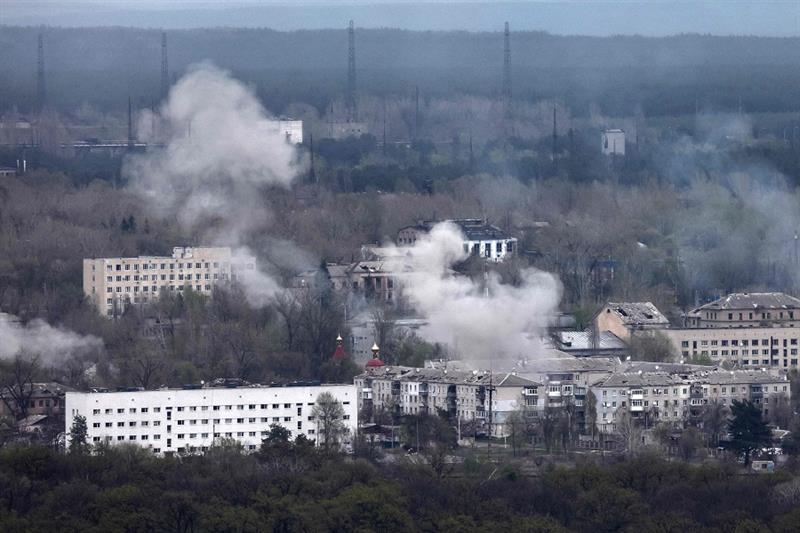 A photograph taken from Novodruzhesk village, shows smoke rising in Rubizhne city, on April 18, 2022, on the 54th day of the Russian invasion of Ukraine. – A series of powerful Russian strikes on military infrastructure in Lviv on April 18, 2022, left several dead and ignited blazes in the western Ukraine city that has been spared fierce fighting. AFP

“There was a major attack in the night” from Sunday to Monday in Kreminna, the Lugansk regional governor Sergiy Gaiday said in a statement on social media.

“The Russian army has already entered there, with a huge amount of military hardware… Our defenders have retreated to new positions,” he added.

“Almost along the entire front line in the territory of Donetsk, Lugansk and Kharkiv regions, the invaders tried to break through our defences,” he said.

“Fortunately, our military is holding on.”

They had however broken through in two places, he added: “Kremennaya and another small town. But the fighting continues. We do not surrender our territories.”

Kreminna, with a pre-war population of nearly 20,000 people, is around 50 kilometres (31 miles) northeast of Kramatorsk, the region’s administrative centre, and is a strategic target for invading Russian forces.

Rubizhne, which is under Russian control, was under intense fire from Ukrainian artillery and mortars, AFP journalists reported.

Powerful explosions could be seen in Rubizhne, sometimes followed by fires and plumes of white or black smoke.

Russian forces have stepped up their offensive to capture the eastern Donbas region of Ukraine having pulled back troops deployed around the capital Kyiv at the beginning of the invasion in late February.