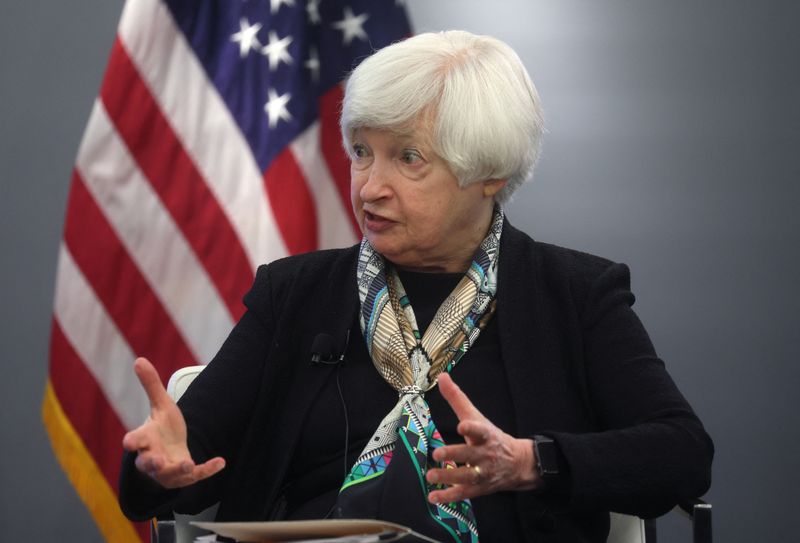 © Reuters. U.S. Treasury Secretary Janet Yellen answers questions about the current and future state of the U.S. and global economy at the Atlantic Council in Washington, U.S., April 13, 2022. REUTERS/Leah Millis

By Andrea Shalal and David Lawder

Even before the war, over 800 million people – or 10% of the global population – were suffering from chronic food insecurity, Yellen said, and estimates showed higher food prices alone could push at least 10 million more people into poverty.

“I want to be clear: Russia’s actions are responsible for this,” Yellen said, adding that the United States was working urgently with partners and allies to “help mitigate the effects of Russia’s reckless war on the world’s most vulnerable.”

Lindner, speaking on behalf of Group of Seven advanced economies, said targeted and coordinated action was needed, but called on all countries to “keep agricultural markets open, not stockpile and not withhold stocks, and not impose unjustified export restrictions on agricultural products or nutrients.”

He said the G7, currently led by Germany, had committed to work with international financial institutions and like-minded government organizations to “act in an agile manner.”

The Treasury said participants agreed to work on an “action plan” to frame the problem, outline joint principles for a coordinated response and map out short- and long-term actions.

Yellen underscored Washington’s commitment to authorizing essential humanitarian aid and ensuring the availability of food and agricultural commodities to benefit people around the world, even as it continued escalating its sanctions and other economic measures against Russia.

She said it was also critical to strengthen longer-term resilience, and called on international financial institutions to help mitigate the global fertilizer shortage and smooth supply chain disruptions for food and critical supplies.

She said they could increase investments in agricultural capacity and resilience to boost domestic food production.

It was also critical to bring in additional sources of financing, including from the private sector, the Treasury said.

Indonesian Finance Minister Sri Mulyani Indrawati told participants that food security would be a key issue in the first session of a meeting of finance officials from the G20, currently headed by Indonesia, warning that food and energy price spikes could “create huge political and social unrest.”

Several participants called on the global community to look at existing tools such as the Global Agriculture and Food Security Program, which was created by the G20 in response to the 2008 food price crisis.

He said cash payments or vouchers would be a good way to help farmers in poor countries buy fertilizer to ensure continued food production.

IMF chief Kristalina Georgieva said the food security crisis was piling further pressure on the 60% of low-income countries at or near debt distress, and urged China and private-sector creditors to “urgently step up their participation” in the G20 common framework for debt treatment.

“We know hunger is the world’s greatest solvable problem,” she said. “And a looming crisis is the time to act decisively.”