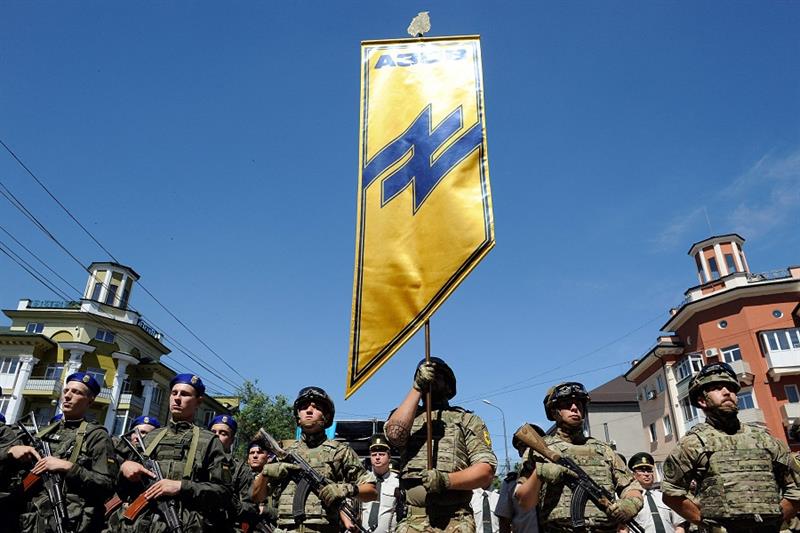 Servicemen of the Azov regiment and Ukrainian National Guard (NGU) marching through the city of Mariupol as they take part in a parade to mark the 5th anniversary of city s liberation from the Russia-backed rebels. AFP

“It’s about tanks, armoured vehicles, or other options individual countries are able to give,” Lambrecht told the NTV broadcaster.

Germany will then replenish these stocks, she said, without giving further details.

The deliveries must happen quickly because “military experts agree that the next two weeks will be decisive in Ukraine’s fight against Russia”, she said.

The tanks will include T-72 models from Slovenia, according to German media reports.

Lambrecht also said Germany would train Ukrainian soldiers to use German-made Panzerhaubitze 2000 tanks — reportedly due to be sent by the Netherlands.

Germany cannot send Panzerhaubitze 2000 tanks itself because its army “does not have the stocks”, Lambrecht said. “But where we can provide training, we will do that.”

Germany has come under fire for refusing to send heavy weapons to Ukraine, even as allies such as the United States, Britain, the Czech Republic and the Netherlands up their deliveries.

But the government has said that after decades of chronic underinvestment, the Bundeswehr German army is simply not in a position to send the weapons Ukraine wants.

Asked whether Germany really could not deliver heavy weapons from Bundeswehr stocks, Lambrecht said this was impossible “if I want to continue to guarantee national and allied defence”.

“In the future, we must be much better equipped. We must no longer allow the Bundeswehr to be cut down to the point where we are in the situation we are in at the moment,” she said.