Russian President Vladimir Putin has accused Ukraine of orchestrating the powerful blast that damaged a bridge linking Russia and Crimea, describing the explosion as an “act of terrorism”.

“There is no doubt. This is an act of terrorism aimed at destroying critically important civilian infrastructure,” Mr Putin said in a video on the Kremlin’s Telegram channel.

“This was devised, carried out and ordered by the Ukrainian special services,” he said.

He was meeting Alexander Bastrykin, the head of Russia’s Investigative Committee, who was presenting findings of an inquiry into Saturday’s explosion and fire on the bridge. 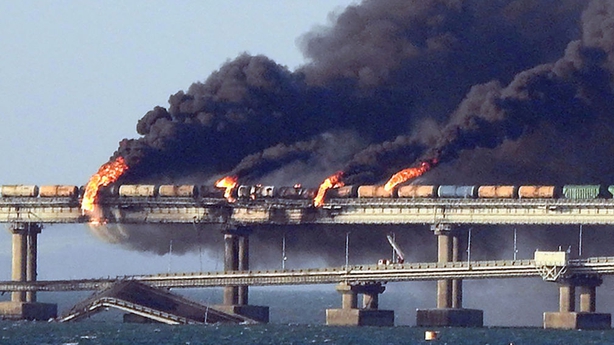 The blast on the bridge over the Kerch Strait, a key supply route for Moscow’s forces in southern Ukraine, had prompted gleeful messages from Ukrainian officials, but no claim of responsibility.

The bridge is also a major artery for the port of Sevastopol, where the Russian Black Sea fleet is based.

The damage to the bridge, which had been an imposing symbol of Russia’s annexation of the Crimean peninsula, came amid battlefield defeats for Russia, and could further cloud Kremlin reassurances that the conflict is going to plan.

Rail services and partial road traffic resumed a day after the blast. Images showed half of a section of the bridge’s roadway blown away, with the other half still attached.

Russia seized Crimea from Ukraine in 2014 and the 19km bridge linking the region to its transport network was opened four years later by Mr Putin. 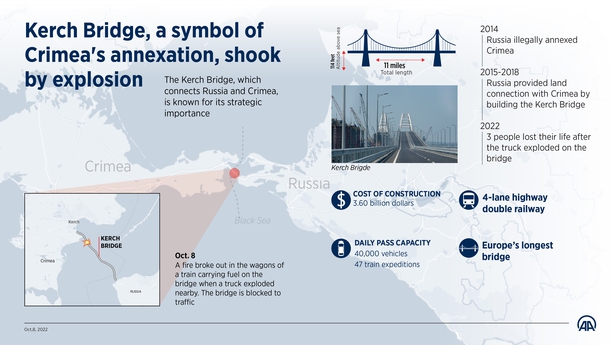 Russia’s transport ministry said freight trains and long-distance passenger trains across the bridge were running according to schedule today. Limited road traffic resumed on Saturday around 10 hours after the blast.

“The situation is manageable – it’s unpleasant, but not fatal,” Crimea’s Russian governor, Sergei Aksyonov, said. “Of course, emotions have been triggered and there is a healthy desire to seek revenge.”

Mr Putin’s comments follow a Russian missile attack this morning in the southeastern Ukrainian city of Zaporizhzhia, in which 13 people were killed and 89 others wounded.

The pre-dawn strikes on Zaporizhzhia were the second such attack against the city in three days.

At least 13 people were killed and 89 others were wounded, 60 of whom were hospitalised, Ukrainian officials said. The wounded included 11 children.

Ukrainian President Volodymyr Zelensky condemned the attack as “absolute evil” by people he called “savages and terrorists”, vowing those responsible would be brought to justice.

Zaporizhzhia city, about 52km from a Russian-held nuclear power plant, has been under frequent shelling in recent weeks, with 19 people killed on Thursday.

Emergency workers and firefighters cordoned off the nine-storey building and dug for survivors and casualties in the smouldering rubble of a massive central section that had collapsed.

Most of the Zaporizhzhia region, including the nuclear plant, have been under Russian control since the early days of Russia’s invasion in February. The capital of the region, Zaporizhzhia city, remains under Ukrainian control.

The UN’s nuclear watchdog has said that the plant is now reconnected to the grid, describing it as “temporary relief in a still untenable situation”. 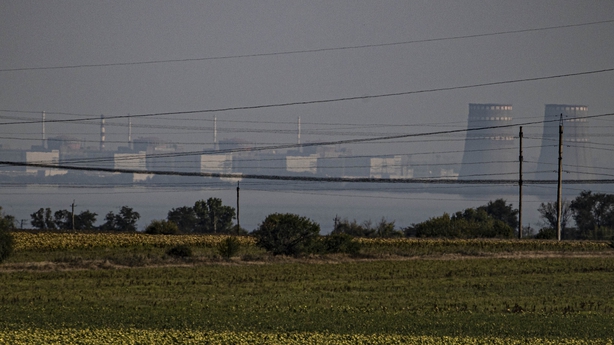 The International Atomic Energy Agency (IAEA) said yesterday that the plant – Europe’s largest nuclear power station – had lost its last source of external power after renewed shelling and was relying on emergency generators.

“Our team at Zaporizhzhia confirms the offsite power line lost yesterday was restored and ZNPP (the plant) is reconnected to the grid – a temporary relief in a still untenable situation,” IAEA head Rafael Grossi said this evening.

Although the plant’s six reactors are in cold shutdown, they require electricity for vital nuclear safety and security functions, including cooling.

Mr Putin ordered his government this week to take over operations at the power station, where fears of an atomic accident remain high.

Mr Grossi was in Kyiv on Thursday to discuss setting up a protection zone around the site which has regularly come under fire with Ukraine and Russia blaming each other.

“A protection zone is needed now. I will travel to Russia and will see Ukraine’s Zelensky thereafter to establish the zone,” Mr Grossi said.

He has stressed the zone’s main aim is “to avoid a nuclear accident at the plant, which remains a very, very clear possibility”.

Electricity has been cut to the site several times since August.