Despite the ongoing military conflict in Ukraine and unprecedented sanctions, Russia remains still a major player in the global uranium market, continuing active mining of uranium and its supplies to foreign customers, particularly the US.

So far, the imposed Western sanctions have not had a major negative affect on the supplies of Russian uranium for Western nuclear power plants.

In March 2022, US President Joseph Biden announced a ban on energy supplies from Russia, however the imposed ban did not affect uranium supplies. According to Reuters, US energy companies Duke Energy and Exelon, as well as the US Atomic Energy Institute, opposed sanctions on the supply of uranium from Russia. According to Bloomberg, in 2020, 23% of the uranium used at US nuclear power plants was supplied from Russia. The share of nuclear power plants in the US energy generation is about 20%.

In early March, the Russian government considered cutting off uranium supplies to the US. At that period of time the Russian Ministry of Energy Alexander Novak spoke about this possibility in the Russian Parliament (State Duma), however the ban was never introduced.

The average annual supplies of Russian uranium to the US are estimated at about 18,000 tonnes for US$300 million. 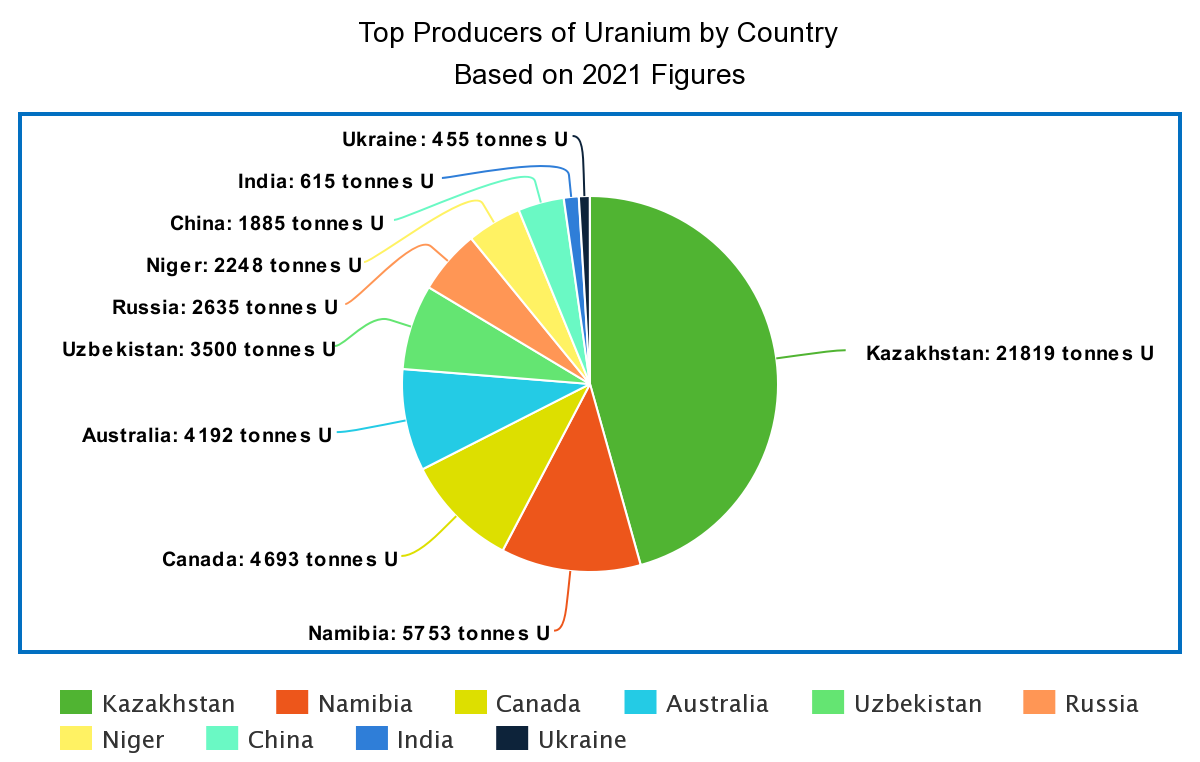 * Data from the World Nuclear Association. Totals may not sum exactly due to rounding.

Most of analysts believe the supplies of uranium from Russia to Western countries will continue. In terms of market structure, currently Rosatom ranks first in the world in terms of uranium enrichment, accounting for about 36% of the global market. Urenco accounts for about 30%, the share of French Orano is 14%, with another 12% of the market being occupied by companies from China. Together, these players control more than 90% of the world uranium market.

The United States now does not have a single uranium enrichment plant, since even the only operating facility in New Mexico belongs to the European Urenco, which means that further supplies from Russia are of an acute need.

As Alexander Uvarov, editor of the Russian AtomInfo business paper told in an interview with the Russian Vedomosti business paper, the US has never had the centrifuge enrichment (the most cost-effective uranium enrichment), which is the Soviet technology that was transferred to Europe, and from there to America, along with former German prisoners of war. In the United States, gas diffusion plants were used instead, consuming an enormous amount of energy, but in the early 2000s they were closed.

As Uvarov has also added after that, the United States tried to launch the American Centrifuge project, which was carried out by the United States Enrichment Corporation (USEC). But the company suffered losses and was forced into a managed bankruptcy in 2014, and the American Centrifuge project was closed. After that, USEC was reorganized into Centrus, which, when receiving funds from the US Department of Energy, tried to revive the centrifuge uranium enrichment project, however without any success.

In case of Rosatom, in 2020 it exported uranium products to 19 countries for 41 customers for a total amount of more than $2 billion. According to the analytical company Ux Consulting, the Russian corporation produces about 7100 tons of natural uranium per year (about 15% of the world production) and ranks second after Kazakhstan’s Kazatomprom.

Most of analysts believe the United States, theoretically, can replace uranium from Russia with other suppliers, but this will not be done quickly due to long investment cycles of enrichment plants.

According to them, usually, the construction of such objects takes at least seven years, and payback is 15–20 years.

Analysts also believe the US production would need to double to replace Russian uranium imports. According to the analyst, for this it will be important to commission another large facility (in addition to the already operating plant in New Mexico).

In this regard, the United States will be forced to buy Russian uranium through other countries in years to come.

Even in the event of an increase in the volume of uranium enrichment in the United States in the coming years, which is part of the long-term US strategy, the States will be able to completely refuse supplies from the Russian Federation only after the expiration of these long-term contracts, i.e: not earlier than 2026.

In 2021, 20 countries produced 77%, 48,303 tons, of the world’s uranium. Kazakhstan, Canada, and Australia alone produced three-fourths of the world’s production from their mines.