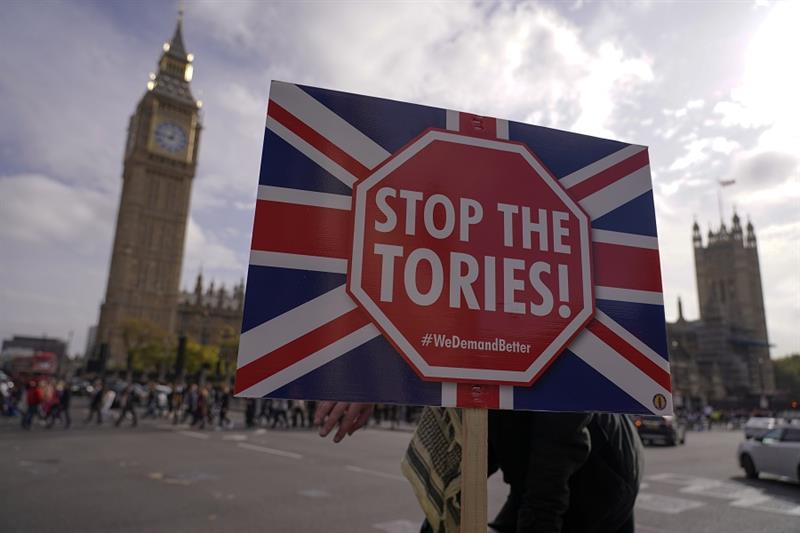 A placard saying Stop the Tories is held by a demonstrator outside the Houses of Parliament, in London, Wednesday, Oct. 19, 2022. AP

The pound traded around 0.4 percent higher against the dollar to $1.1273 after Truss ended six tumultuous weeks in power — but analysts said gains were pared by the ongoing uncertainty.

The FTSE 100 index was up 0.1 percent while the country’s borrowing costs eased on the news, as the yield on 30-year government bonds, known as gilts, fell to 3.94 percent.

“Sterling and gilts rallied as the sorry reign of Liz Truss came to an end,” said Markets.com analyst Neil Wilson.

“After a flurry of activity, we are seeing a retracement of these initial moves as markets realise that there’s still huge uncertainty about whether the Tory party can survive in power.”

Wilson warned the government’s “economic policies were already dead in the water so the market doesn’t have a huge amount of genuinely new information to move on.”

The government had teetered on the brink of collapse after the resignation of home secretary Suella Braverman Wednesday.

On Thursday, Truss announced that she “cannot deliver the mandate on which I was elected.”

It comes days after the sacking of finance minister Kwasi Kwarteng and the dismembering of her government’s debt-fuelled budget that had sparked chronic market turmoil.

“Although the resignation of Liz Truss as Prime Minister leaves the UK without a leader when it faces huge economic, fiscal and financial market challenges, the markets appear to be relieved,” said Paul Dales, chief UK economist at Capital economics.

The recovery seen Thursday was due to “the markets… further pricing out the risk premium that the Truss government generated.”

There was still plenty of caution towards the UK.

“While this has brought about a brief respite to the political risk premium it’s hard to see how any replacement will be able to coalesce around any form of unity of policy in this dumpster fire of a government,” said Michael Hewson, chief market analyst at CMC Markets.

Elsewhere, US and European markets rallied a day after losses over persistent concerns over soaring inflation, interest rate hikes and looming recessions.

The haven dollar soared above 150 yen for the first time since 1990 before falling back slightly — stoking speculation that Japanese authorities could intervene again to support the battered currency.

The greenback also rallied to a record high at 7.2790 against the offshore yuan, with the US unit boosted by the Federal Reserve’s aggressive interest rate hikes.

Asian markets finished the day in the red, with selling also fuelled by concerns about the Chinese economy as Covid cases spike in the country and leaders stick to lockdown strategies.

A decision to delay the release of China’s third-quarter economic growth data this week added to the unease.

Oil extended Wednesday’s rally that came in reaction to a drop in US petroleum stockpiles, and despite President Joe Biden’s decision to release 15 million barrels from US strategic reserves.