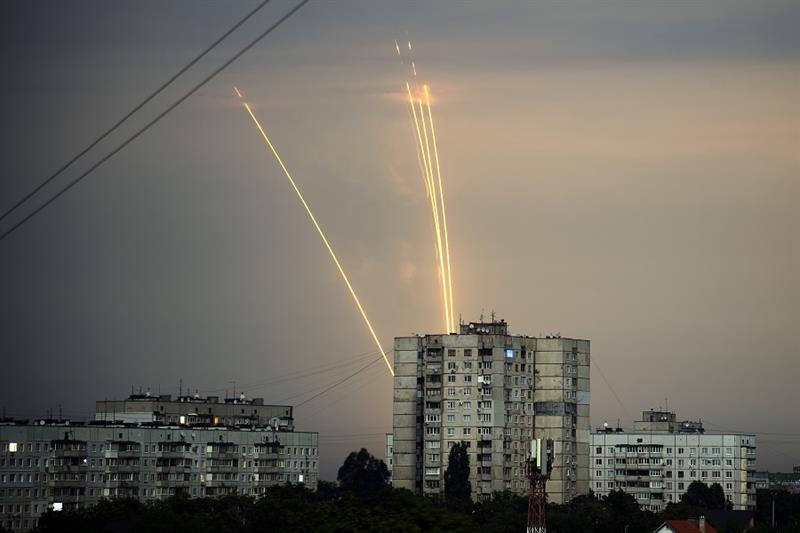 Russian forces attacked Ukrainian positions near Bilohorivka, a village in the Luhansk region of eastern Ukraine. In the neighboring Donetsk region, fighting raged near the city of Bakhmut. Kremlin-backed separatists have controlled parts of both regions for 8{ years.

Putin declared martial law in Luhansk, Donetsk and southern Ukraine’s Zaporizhzhia and Kherson regions on Wednesday in an attempt to assert Russian authority in the annexed areas following a string of battlefield setbacks and a troubled troop mobilization.

The unsettled status of the illegally absorbed territory was especially visible in the Kherson region’s capital, where Russian military officials have replaced Kremlin-installed civilian leaders amid a mass evacuation and an ongoing Ukrainian counteroffensive.

Kherson city, with a prewar population of about 284,000, was one of the first urban areas captured by Russia when it invaded Ukraine, and it remains a prime target for both sides because of its key industries and major river port. Officials said 15,000 of a planned 60,000 residents had left the city as of Thursday in anticipation of intensified assaults.

Meanwhile, Russia continued its stepped-up attacks on Ukraine’s energy infrastructure, dispatching drones and missiles to eight regions. At least three civilians died and 14 were wounded in overnight attacks across Ukraine, according to the Ukrainian president’s office.

In Kryvyi Rih, Russian strikes damaged a power plant and another energy facility, cutting electricity to the central Ukraine city of about 600,000 residents. Apart from being Zelenskyy’s hometown, Kryvyi Rih is home to several large metallurgical factories that are key to Ukraine’s economy. Regional governor Valentin Reznichenko said the city sustained serious damage.

Russia’s sustained attacks on Ukraine’s infrastructure prompted authorities to ask residents to reduce their energy consumption from 7:00 a.m. to 11:00 a.m. starting Thursday and to dim city street lights. They warned of rolling blackouts.

Despite the Kremlin’s claims to the contrary, a leading Russian military expert unwittingly acknowledged that Iran has supplied Russia with drones it uses in Ukraine.

Ruslan Pukhov, head of the Center for Analysis of Strategies and Technologies, a Moscow-based think tank, asked journalists before a television interview not to ask him where the drones came from, unaware that he was live on air.

“We all know that they are Iranian-made, but authorities haven’t acknowledged that,” Pukhov said.

Asked Tuesday whether Russia was employing drones from Iran to hit targets in Ukraine, Kremlin spokesman Dmitry Peskov emphasized Tuesday that “Russian equipment with Russian names is being used.”

The Iranian drones have reportedly been rebranded Geran-2 by Russia.

Iranian Minister of Foreign Affairs Hossein Amirabdollahian tweeted that he told the European Union’s foreign affairs chief that “the claim of sending Iranian missiles to Russia to use in the war with Ukraine is a baseless claim.“

“We have defensive cooperation with Russia, but without a doubt, sending weapons and drones against Ukraine is not our policy,” Amirabdollahian said.

In another sign of Russia’s wavering mobilization, Ukrainian authorities said more than 3,000 Russians have so far called a dedicated hotline for soldiers who don’t want to take part in the war and want to surrender.

Hotline spokesman Vitalii Matvienko said more Russians were calling after Putin ordered a call-up of army reservists last month, with some reaching out in tears from the fear of possibly getting drafted.

“When the Ukrainian counteroffensive is advancing, the number of calls is rising,” Matvienko told The Associated Press in an interview.

Ukraine says it guarantees the safety of anyone who surrenders in line with international law and that they can either return to Russia or apply to live in some European Union countries or in Ukraine.